Carbon is the fourth most abundant element in the universe and comprises 18.5 percent of the human body. Carbon is the foundation for all life on earth and scientists believe that without it, the universe would be sterile. So when is carbon a problem and how does a “carbon intensity score” help tackle this problem?

When carbon is a problem

Carbon can become a problem when it joins with oxygen and becomes the compound carbon dioxide (CO2) a colorless, odorless gas. Carbon dioxide is a greenhouse gas (GHG), meaning it traps heat in the atmosphere. One way carbon dioxide enters the atmosphere is through burning fossil fuels such as coal, natural gas, and oil.

According to climate.gov, the annual rate of increase in atmospheric carbon dioxide over the past 60 years is about 100 times faster than previous natural increases, such as those that occurred at the end of the last ice age.

Greenhouse gases remain in the atmosphere long enough to become well mixed, meaning that the amount of gas measured in the atmosphere is roughly the same all over the world, regardless of the source of the emissions. This means that fossil fuels burned in California have an impact on villages in Mozambique, halfway around the world.

What is a carbon intensity (CI) score?

Carbon intensity is simply defined as carbon dioxide (CO2) emissions per unit of energy by the US Energy Information Administration. The carbon intensity score measures GHG emissions associated with producing, distributing and consuming a fuel, which is measured in grams of CO2 equivalent to megajoule (gCO2e/MJ). Different fuels emit different amounts of carbon dioxide in relation to the energy they produce when burned. For example, biofuels such as ethanol and biodiesel have been proven to emit significantly lower greenhouse gas (GHG) emissions than petroleum-based fuels.

Well-to-wheel CO2 emissions include all emissions from the fuel’s origin to when it is combusted in a truck, car, forklift, or other vehicle. According to the U.S. Department of Energy, well-to-wheel includes emissions related to fuel production, processing, distribution, and use. As an example, in the case of gasoline, emissions are produced while extracting petroleum from the earth, refining it, distributing it to fuel stations, and burning it in vehicles. This means that the petroleum fuels we consume have contributed to pollution long before we have purchased them.

Most importantly, this process is able to be calculated very carefully and accurately, resulting in a “carbon intensity score” and is used in various programs, including the California Low Carbon Fuel Standard, Oregon Clean Fuels Program, and several others.

How does a carbon intensity score work in a clean fuel program?

Clean fuel programs are an innovative way to combat climate change without increasing the public tax burden. Let’s use California as an example, although all clean fuel programs in the United States work on a credit/deficit model based on a carbon intensity score. Businesses and other entities that create or use fuels that are cleaner than the annual carbon intensity (CI) limit set by the California Air Resources Board (CARB) can generate credits, while higher carbon intensity fuel manufacturers or importers create deficits. Additionally, a fuel producer may generate credits to offset their own deficits by producing a less carbon intensive fuel like renewable diesel.

Currently the Low Carbon Fuel Standard in California is overperforming. 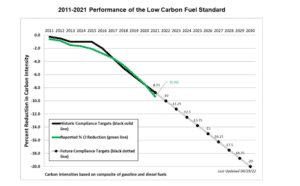